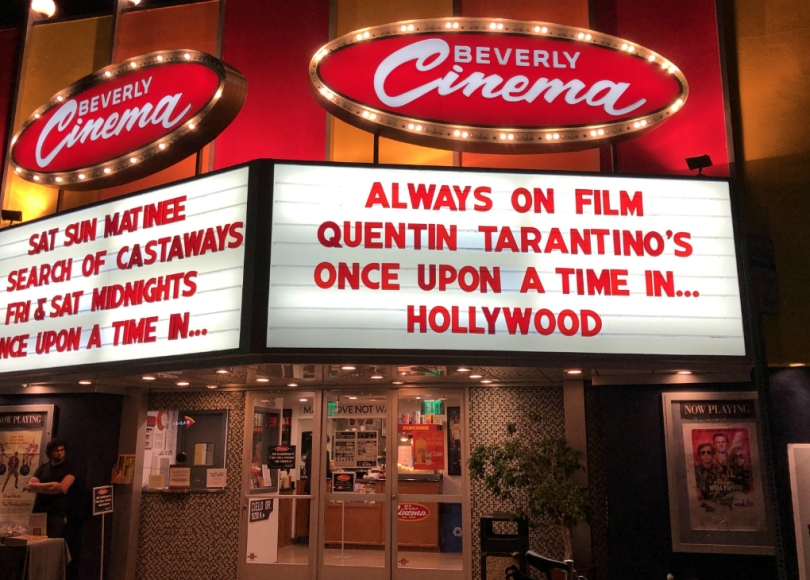 This post is a bit different. Today I want to talk about a place rather than a film. For anyone living in or visiting the LA area I highly suggest watching a film at the New Beverly Cinema on Beverly Blvd. It is owned by my all-time favorite director (and since I met him last month) and friend, Quentin Tarantino. Side note, I told him after just had having moved here from Detroit  his theater was my new happy place and we’re super tight now.

When you see a film here, you feel like you are part of one big family. Everyone there is a film lover. The ticket prices are fair, the popcorn is good, they have vegan hot dogs (so LA) and even Faygo pop (go Detroit!)! I’ve been to events as well as film screenings and you’re not just experiencing the movie, but also an atmosphere that accompanies it. The audio of the movie plays even in the bathroom so you don’t have to worry if you have small bladder, you won’t miss a beat!

When I saw Once Upon a Time in Hollywood there the fake Rick Dalton film posters hung on the walls and old 1960’s radio advertisements played before the show. I admit, I may be biased due to my love of QT, but I still highly recommend a pit-stop. Worse case, there’s a really good ice cream place across the street if all else fails, Milk.